The Appalachian Mountains have reached legendary status for their epic natural beauty as well as their rich cultural history. Just a three-hour drive from the iconic Blue Ridge Mountain range is the beautiful town of West Jefferson. If you’ve spent any time looking for homes for sale near West Jefferson, NC, you might have some questions about what daily life is like for the average West Jeffersonian. This article aims to explore frequently asked questions about West Jefferson so prospective house hunters can buy with confidence and rest assured they’ve landed in a truly special spot.

When Was West Jefferson Established?

This historic town was originally founded around the Virginia-Carolina railroad as a hub for travelers and traded goods. West Jefferson is located along the route of the well-known and historic “Virginia Creeper” railway, which was named after a native plant of the same name which was seen growing near the track. In 1915, the General Assembly of North Carolina chartered the town of West Jefferson, roughly two miles from the town of Jefferson, NC.

What County Is West Jefferson, NC In?

West Jefferson is located in Ashe County, in the Appalachian Mountains of North Carolina. It lies nestled in the valley between Paddy Mountain to the west and the iconic Mount Jefferson to the east.

Fun Fact: The towns of Jefferson and West Jefferson both permit the sale and consumption of alcohol, whereas the rest of Ashe County is a dry county.

How Big Is West Jefferson?

What Is the Primary Industry in West Jefferson, NC?

Historically speaking, much of West Jefferson’s industry came from the railway freight, especially lumber from the surrounding forests. Most of this was shuttled from the town by way of the Virginia Creeper, which also bore freight and passengers. Banks and other local businesses soon followed, fueled by the railway traffic until the Creeper’s last run in 1977.

Today, however, its primary economy comes in the form of retail trade, social assistance/health care, and educational services. West Jefferson also relies on tourism and the local art scene to breathe fresh life into the downtown businesses and surrounding area.

What Is West Jefferson Known For?

While West Jefferson has long celebrated its ties to the railway, many folks today consider it a great place for the arts. With numerous thriving galleries within the town as well as unique public art and murals to enjoy, West Jefferson keeps its tradition of hosting art and music events alive to this day. With over 15 murals packed within two square miles, it’s hard to miss the creative strokes which have provided West Jefferson with so much character.

Be sure to check out the multitude of downtown art galleries should you visit between the months between June and October for their beloved Gallery Crawls. For more information about West Jefferson’s art scene, click here. 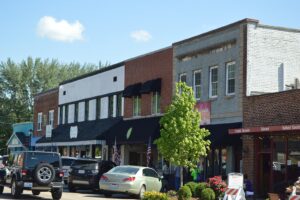 What Is the Closest Big City to West Jefferson, NC?

While the small mountain town lifestyle has its perks and appeal, there are certain activities and events which call for the big city. Whether you are interested in a day of shopping or need to catch a flight, most of what we love about civilization can be found in Charlotte, NC–just over two hours’ drive away.

Greensboro, NC is also roughly two hours away, though its airport is smaller than that of Charlotte.

If you are looking at homes for sale in West Jefferson, NC, you’ll likely want to know if it’s a safe place to live.

The good news is, West Jefferson falls below the national average for violent crime in the United States. Out of a scale of 1 (low crime) to 100 (high crime), West Jefferson ranks 16.3. So yes, it’s pretty safe to live in West Jefferson, NC.

Fresh, mountain air and temperate summers can be expected in West Jefferson during the warmer months, but what about during the rest of the year?

During the rainy season, West Jefferson gets an average of 53 inches of rainfall each year. Bear in mind this translates to roughly 24 inches of snow, on average, in the winter.

Not to be outdone by the precipitation, however, each year there are an average of 197 sunny days in West Jefferson, NC.

While you can expect plenty of sunny days, you don’t have to worry about West Jefferson growing unbearably hot. Temperatures tend to range between 20°F-80°F year-round; West Jefferson is especially nice during the summer months, during which time it is rated 8.8 out of 10 for weather enjoyability. 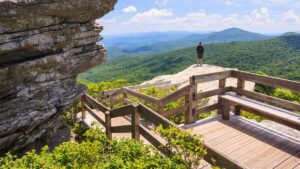 Are There Any Festivals In West Jefferson?

If you’re looking for live music, art shows, or festivals, there’s often something going on within the town of West Jefferson.

For example, West Jefferson residents have an annual tradition of celebrating Christmas…twice! Each year, they celebrate Christmas in July, perhaps as a nod to the strong Christmas tree farm influence from the surrounding area. At this event, visitors can expect to experience live music, local food, cloggers, Civil War reenactments, and more!

For a more complete look at upcoming festivals and events, check out the Ashe County Chamber of Commerce calendar of events!

How Are the Public Schools In West Jefferson?

If you have children and are thinking of purchasing a home for sale in West Jefferson, NC, you’ll want to know about the public school system to see if it’s a good fit for your kids.

What Is the Median Home Value in West Jefferson, NC?

When looking for homes for sale in West Jefferson, NC, it’s good to keep your options open. With the value of some homes in the area reaching into the millions, that isn’t necessarily the norm.

Hopefully, over the course of this article, you feel as though you’ve gotten to know the town of West Jefferson a little better. If you are interested in browsing homes for sale in the area, check out available listings in West Jefferson, or reach out to us via our contact page today.

And who knows–your dream home could be waiting for you within this cozy Appalachian town!